We Chose an Offbeat Location for New Year Celebration – Lansdowne

So how do you like to spend your New Year? Party? Family? Holiday? Cruise? Especially at a time when the third wave of the pandemic was knocking the door.

I am not a party person and so prefer to stay with family or holiday and this New Year we went to a very small cantonment town of Uttarakhand, Lansdowne. Named after, the then Viceroy of India, Lansdowne. It was originally known as Kaludanda. It is a lesser known but a picturesque hill station amidst coniferous forest in the background of mighty Himalayas. 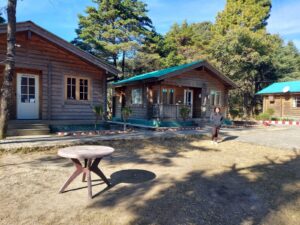 Children were thrilled as they were already through with their half-yearly exams and they were looking forward for a holiday. So they got up early and we left at 7 am on 31st December,2021. It was 7/8 degrees in Delhi NCR and  showing 2/3 degree in Lansdowne. We had two reasons for leaving early, one, we wanted to reach by afternoon as it involved Mountain driving and two, we were expecting a traffic on UP- Uttarakhand border.

The moment we reached Khatouli or midway for Delhi Dehradun. We noticed an interesting traffic movement. Almost 85% traffic followed Dehradun Highway which gave us two clues. One, there’s not going to be much rush in Lansdowne (as expected) which provided a smile to our face; two, Mussoorie was going to be full for the next two-three days (and we had avoided it). 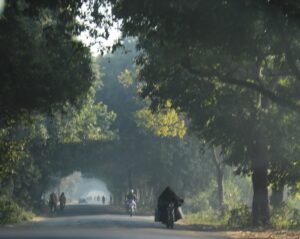 Although the road was not as smooth as Dehradun Highway but certainly green and scenic. The trees from both sides of the road formed a beautiful thick green canopy.  The whole stretch had fields mainly of mustard and sugarcane. Though the refreshment facilities were not much and after a stretch of a little bumpy ride in Najibabad, we couldn’t find a proper loo for about 15-20 minutes . But we took it positively and thought that this could happen anywhere even on highways and expressways and incase of unforeseen traffic jams etc.

By noon, we had crossed UP, Uttara Khand border and thankfully there was no queue for checking or RTPCR. Police was perhaps more busy checking suspicious people  and  families were spared. 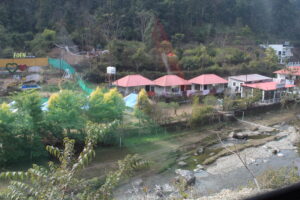 The road to Lansdowne after Kotdwar is not only picturesque but also dotted with many riverine resorts, one would love to stop by and experience. But we were in a rush because our destination was booked right at the top of the town in “Tip and Top Resort”. 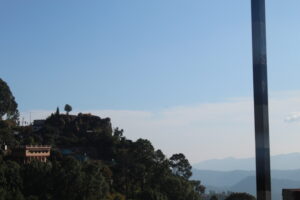 Though we stopped for refreshment at “Flavours” – a restaurant on Kotdwar-Dugadda road and it was worth visiting. The mountains looked lush green and beautiful with people working on their step-farms. Toilets were also clean and food definitely fresh, good in taste and prices were reasonable. So one can stop here and will not be disappointed. 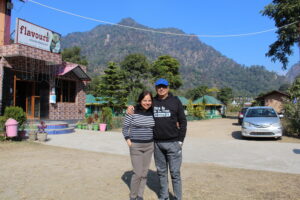 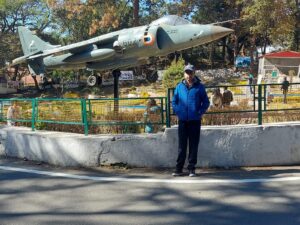 The moment we entered the town or the cantonment area, the aura changed. The roads were spic and span, well painted, gardens were trimmed and blooming with colourful flowers, the town was extremely beautiful and soldiers could be seen everywhere guarding their town. It was a beautiful experience altogether, a little different from other hill stations of Uttarakhand. The U-pin turns led us to the top of the hill station, Tip and Top. This point is a famous view point and our resort of Garhwal Mandal Vikas Nigam was located here. The best location of Lansdowne, at least in my view. As we had reached early, we became the choosers. There were four family suits and we requested one with a good view. The In charge, Mr. Purohit gave us the one at the topmost location with a separate bonfire area and valley view. From our room, sun rise was visible through the mountains and from children’s room, sun set.

Though the resort had arranged a bonfire and buffet for the guests but children wanted to enjoy in the cottage and watch some TV show. It was getting colder and so we chose to be inside, made some Maggi and that’s it. This was definitely one of the best ways to celebrate for us. Although not for a health freak like me but on 31st, it was ok. This was the way children wanted it.

The next day we got up early, enjoyed our hot sips with the hues of sun peeking out from snow-packed mountains. I just hoped if I could welcome every New year with such serene brightness and positivity. Children were still sleeping and so we sipped one more cuppa to enjoy the warmth. 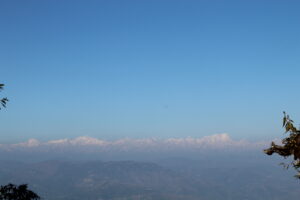 Later we got ready, had nice breakfast and went to Tip and Top view point. Though the choice was limited but bread omlette and aloo paranthas were good enough to fill our bellies.

At ‘Tip and Top’ View Point, we did some photography viewed some distant points through the telescope and got back, walking. At resort, we picked the car and went  for boating at Bhulla Tal. Although I wanted to start my year by visiting the famous Tarkeshwar Temple (an ancient Shiva temple) but children wanted to relax and enjoy. So we agreed reluctantly. Though there was some rush but since it was managed by Indian Army hence our turn came within no time and we enjoyed boating in that small pond. The charming mountains showed us a different beauty from this part of the town. 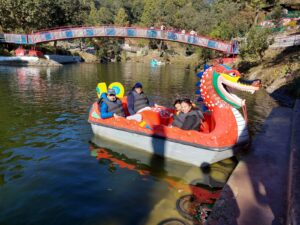 For lunch we went to the main market but there were just 2-3 restaurants and all full, so we picked some cake and pastries from the Cant Bakery, which was damn cheap and went back to resort for Lunch. The market also was very clean although this area was not in the cantonment zone.

Later we went to the Old British Church. Though small but it had its own beauty. Sun set view point was at a walking distance from resort and so we walked down and my passionate husband did some photography of the  changing shades of sunset. 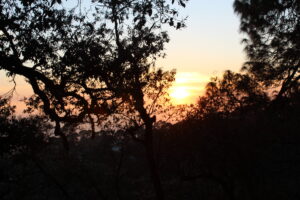 Children were full of zest,  as it was 1st Jan, 2022 and so we did some bonfire in our area, with just four of us and enjoyed. The dinner was ordered from the restaurant that day and since we were all tired; all of us slept by 10/ 10:30. 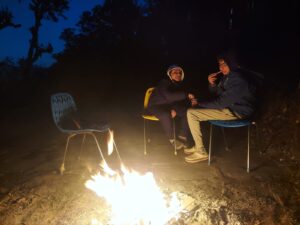 We were ready to depart on 2nd and so after a nice breakfast under the sun, we packed up and left for Noida. Since we departed late, we got stuck in a small jam on Meerut Expressway, possibly because of the New Year weekend.  Though we reached home a little late but we had welcomed this New Year, the way we wanted to, with a new ray of hope, health and happiness.

A Poetry Book Which Will Strike the Chord of your Heart