Santorini – A Beautiful and Happy Island 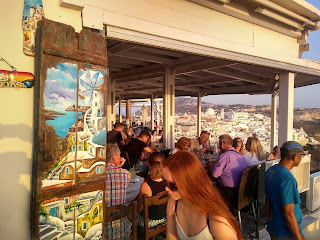 Being a beach person, islands are my natural choice for holidays and having seen the beautiful islands of Bali, Phuket and Phi-Phi, it was time to sail through the Mediterranean.
So this summer we went to Greece and did a lot of island hopping which included a two day trip to one of the world’s most beautiful island, Santorini.
Though I knew that it was one of the most popular and beautiful island in the world, but what I didn’t know was that even the people here were helping and happy.
Initially, I was less interested in covering Santorini and Mykonos because of the rates of the hotels and villas but my husband really wanted to. After all this was our first visit to Greece. And I am glad, we went there else I would have missed something worth seeing and experience.
Though we stayed on the other side of the crescent because of our budget and late bookings, but there is a key for all those budget travelers and honeymooners too. If you really want to experience the most beautiful part of Santorini, get your hotel booked as early as possible. If possible book six months or more, prior to your visit because the hotel prices keep rising especially those of volcano or caldera view hotels, which are endowed with an out of the world experience. I would specially suggest this to honeymooners because every view there is stunning and romantic. But come August and they are at its peak along with the rush so avoid August. 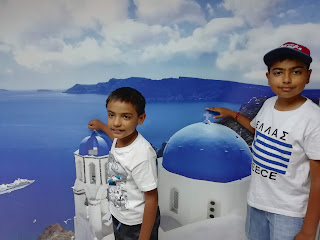 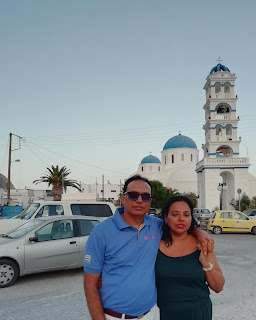 The island, painted in blue and white around the black, red and white volcanic soil, is undoubtedly, one of the most beautiful islands I had ever seen. The sudden rise of cliffs and beaches makes it very different from Asian islands that are lined with coconut and palm trees. 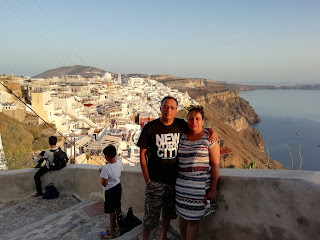 The beautiful towns of Fira and Oia on the cliffs that rise suddenly over the sea have stunning views of sea as well as land. We particularly fell in love with Fira and visited twice. The paved stone pathways were lined with shops selling white and blue signature dresses, souvenirs, Greek restaurants, fast food joints etc. 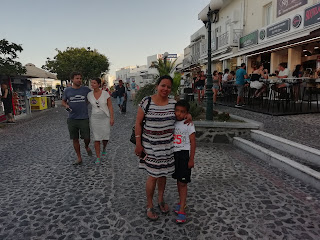 After purchasing a Greek T-shirts for my kids, we ate the most delicious Greek yogurt, at Fira. We could choose the flavor of the yogurt with endless variety of toppings which not only included fruits, dry fruits and syrups but chocolates, gems, and other decorative edibles too.
And then we saw people riding on donkeys to travel up the cliff and down; these donkeys were as huge as horses in India. Just before dinner, we also got some pictures clicked in traditional Royal Greek style too. 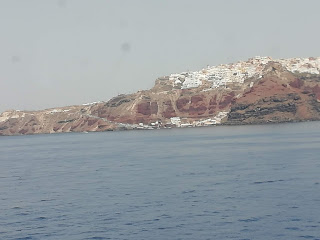 Every hotel, restaurant and shop is traditionally Greek in style and painted or tiled white and blue. So don’t forget to enjoy your walk around the calm and serene white and blue villages, colorful beaches and towns of Fira and Oia. People come here to witness the most spectacular sceneries and sunsets. You can also take a tour to the famous vineries and ancient historical sites, though we didn’t, as our children were quite tired and paucity of time. 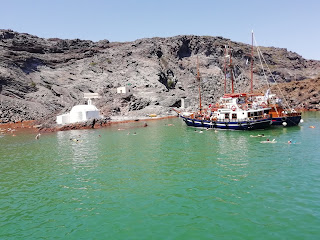 Volcano has shaped the rugged terrain and the beaches of the entire islands. Santorini is an active volcano and last erupted in 1950. This was the first time we saw an active volcano with crater emitting hot fumes in Nea Kameni, a small nearby island (which is part of Santorini main island).
The volcanic lava pebbles have made the beaches black, red and white. The volcanic island of Nea Kameni was totally black and grey; pathway had been carved amidst black sand and pebbles and we could only see huge black rocks and mountains apart from sea on the other side. Since I was in my flit-flops and my son was tired of walking under the sun, I wasn’t motivated enough to track the volcanic mountain initially. But after a while, watching our beautiful guide tracking up the volcano with the tour group and the desire to watch the beauty of the volcano; I encouraged my son and pushed him and myself to the track and I was glad, we did. For the first time in our life, we saw a volcano with a crater emitting hot gaseous fumes; apart from this, the view was magnificent from the top. This also gave some practical geography lessons to my son. He was so overwhelmed to notice the fumes, hot black rocks and black volcanic beach. 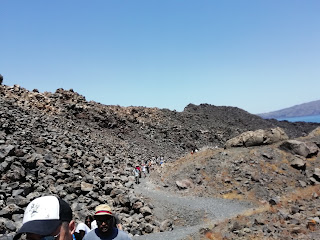 Along with the beauty of the island, I also liked the people of the island. They were all so happy, cooperative and rejoicing as if something exciting was happening in their lives.  Have you ever seen a smiling and helping bus driver and conductor who are working in ecstasy?
At least I hadn’t till I visited Greece; though I have read about such infectious happiness in Bora-Bora. I particularly remember one bus conductor who guided the passengers before they boarded the bus and closed the doors only after ensuring that everyone was going to the Perissa (the destination) and nowhere else along with a beautiful and exciting “I love you all” flying kiss. Our host too, the beautiful owner of Hotel Porto Perissa, guided us so well that we soon became friends. The girls and boys working in the restaurants were ever enthusiastic and carry an infectious smile. They were always ready to help you click your pics and choose your type of menu. I had never seen such a happy island.
Apart from the beauty of the island and its people, we enjoyed the delicious Greek food too. Vegetarian Moussaka is what I still remember and tantalizes my taste buds even now, one of the most delicious Greek food I had at Aqua Santorini Beach Restaurant. We also ate the tastiest waffles and pancakes in the breakfast on the beach of Perissa before leaving for Mykonos. 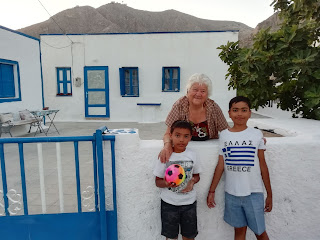 It was indeed the most memorable trip which reiterated the message, I have always believed in, that no job is menial and if you love your job and consider it important, you can be the happiest person on this earth.

Passion- Do You Have One? Five People – Who Must Have a Passion

Five Reasons: We need a Digital Detox and How to do it?

It's really a great expedition and greater effort of choosing the words to pen down the experience. The joy in writing is evident from the joy you have felt in Santorini. I hope this infectioious smile will be spread here too.