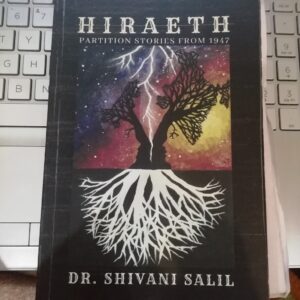 “If East and West Germany can unite, why can’t India and Pakistan ?” said the old man with crow’s feet around his eyes but gleaming with energy. “So, let me conclude here with the powerful punch – See you in Sindh, our homeland. Jai Jhulelal!”

That was 1990, the world was changing. USSR had split but Germany had united. I was in school and this was a small speech by an old gentleman, who was also a member of the Sindhi Association, Jaipur like my grandfather. Grandpa had taken us to the  Diwali celebrations of the Sindhi Association, where we were supposed to perform.  What touched me that day were the words used by this old gentleman and the way he was applauded by the audience. That day I learned about their longing, the yearning for their homeland. I’d seen the same yearning in my grandpa’s eyes and in many old eyes of the family.

So, when a writer friend wrote a book on Partition stories, how could I miss it and especially when the title was so intriguing and self-explanatory. “Hiraeth- by Dr. Shivani Salil” beautifully epitomizes that longing in every story of the book. This single word contains so many emotions and feeling that I think no other title could have done as much justice as Hiraeth.

Being a grandchild of a refugee who had to leave his homeland in Sindh, every story touched me and made me feel for them. Stories are written well after proper research work. What I liked, is the use of local language – Sindhi, Multani, Punjabi, and Urdu – which made it easier to visualize the scenes and characters; she’s mentioned even the erstwhile landmarks like ‘Shah Almi Gate’ in Lahore which was destroyed and doesn’t exist anymore.

I loved the story ‘Pairahan’, maybe because it was about the love that existed between a Sindhi Hindu family and a Muslim family. But the book contains stories of all the affected communities– Sindhi, Multani, Punjabi, and Muslims. This is another thing that I liked about the book; the stories were not only from India but Pakistan too, showing how the common man was affected around both sides of the political boundary. How political decisions created havoc in the common man’s life?

In all, there are twenty-four stories, and the title of most of the stories are in the Urdu language with their English meanings in the bracket.

Even the cover page has been designed very thoughtfully. It shows a tree broken into two parts by lightning and getting divided into India and Pakistan. The artist has beautifully shown one part of the tree as India and the other part as part of Pakistan, through the maze of branches. Also, the colors have been widely used. The roots in white and the tree in black with hues of yellow, red, and blue depicting fire and separation of the tree with its roots.

Almost all the stories display the struggle of characters like a caterpillar and how every time the caterpillar managed to come out with flying colors like a butterfly. The writer has definitely succeeded in dealing with such a delicate subject.

The only thing I didn’t like was that a few stories ended up on a sad note. I just wish they had a happier ending too; but in reality, they weren’t.

So, I am sure if you like to read partition stories and movies you will love this book too. The book has been published by Room 9 publications of Artoons Inn. Artoons Inn is a great platform where writers and other artists reside. The book is also reasonably priced at Rs. 275/-  and it’s free on KU.

A must-read for everyone as these are the stories of struggle, hope, and evolution. Thank you Dr. Shivani Salil for such a lovely author’s note for me. It really means a lot to me.

Age is just a number ….–Series – Meet Sheetal Gupta the 45 plus singer who recently earned fame after her song ” Kadi Hoon Karke” of Virgin Bhanupriya

An Inspiring Story of a Tennis Legend and his Comeback...

From a Stock Broker in US to a Yogi at...