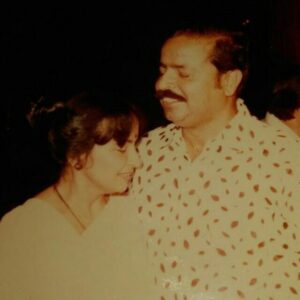 “Happy Anniversary Mummy” greeted my elder sister with a cake. It had not been even a year of my father’s demise and she had the audacity to wish Mummy. Yet I kept a mum. “So what if Papa is no more. For us, now, you are both –  our Papa and Mumma. Because of him we are.  Because of him you are our mother. Because of this date, you became two and then five and now thirteen. Isn’t it a day to be celebrated? Because of him, you are not alone but with his children and grandchildren. Just because he is no more, we shouldn’t be unhappy. He is in all of us. We all carry some or the other trait, he had. He always wanted us to smile. Let’s celebrate his life instead of mourning his death. He is blessing us.”  She said in one go.

Later, with time I started admiring my sister for her trailblazing thoughts so much so, that we started wishing mom on her anniversary and celebrated our father’s birthday too, instead of mourning or trying to avoid the dates. With this beautiful thought, we started celebrating the anniversaries and birthdays of every member of the family even in my Grandpa’s WhatsApp group with their pictures – living and departed souls- both. Even though Grandpa passed away some eighteen years back, we started celebrating his birthday and wedding anniversary. Reason …same…. because of him we all are. We often remind each other of his never-dying spirit. We often tell our children his stories. We tell them how he established himself in India after partition.

We wrote messages to heaven. We remembered everything we liked about our beloved deceased.  The family of my grandpa is huge now. He had six children and now those children have also become grandparents. I am glad we all are connected – again- because of his sanskaras.

Today on Mummy’s anniversary, I know she must be missing Papa but what could be better than celebrating his memories this day, his adventurous and daring attitude. Why not rejoice when people remember him for his unique personality? Why not take pride in the fact that numerous people came to join his funeral and consoled us. I didn’t know many, being his daughter. Let’s celebrate lives rather than mourning their deaths because the fact is, sooner or later, we all have to go.

Let’s make this world a little better place before leaving for our final abodes and try to abolish that orthodox thinking.

A Poetry Book Which Will Strike the Chord of your Heart

Thank you so much 🙏

Very nicely you expressed your feelings. I am agree with you beta. Papa is not in this world, he is always with us. Evergreen bonding indeed

Your concept of looking forward and finding positivity in everything that comes your way is really appreciable!👌