written by Ritu Gulabani June 30, 2018
Greece is famous not only for Greek jewelry, wine and olive oil but also for traditional Greek sandals and for that too, one shop is most known. “The MELISSINOS ART! Artist Sandal Maker who puts art on your feet.” – It is said and he is indeed one of the best traditional shoe-makers in Europe.
A historic leather footwear shop which started in 1920 by Georgios Melissinos, who used to make ancient looking sandals mainly for theatrical productions and the tradition of family sandal business was carried forward by his son Stavros Melissinos and grandson Pantelis Melissinos. But Stavros Melissinos made the same sandals for everyday life and people made fun of him until Sophia Loren walked into his store, sometime in 1950s and today they are called the God of  sandals. There are even imitations of Melissinos originals.
The shop and the Melissinos are famous in Athens not only because of the beauty and perfection in their creation, which is very much visible the moment you enter their gallery, but there are other reasons too.
One, there is a name for perhaps every creation. These names have been kept on the famous ancient personalities of Greece like Number 7 is Cleopatra, Number 24 is Socrates and No. 21 is Plato, designs, very much match the respective personalities.
Two, some have even been named after the celebrities and royal people who bought it or perhaps got it designed for themselves like No. 20 is Jackie O (named after Jacqueline Onassis, wife of John F Kennedy, the erstwhile President of USA) and No. 25 is Sophia Loren (the very famous actress and singer from Italy).
Three, this is a shop of not only a sandal-maker but much more. Pantelis Melissinos is a Playwright, Artist, Designer, Sandal Maker, Poet and composer too. His father Stavros Melissinos has been the celebrated Poet Sandal-Maker of Athens.
Matt Barrett in his “Top Ten Things to do in Athens” mentions “The Poet Sandal Maker” as one of the must meet person in his Athensguide.com. He also writes, “Where else in the world can you find a guy who is a published poet, a really famous one at that, whose works have been translated into English, French, German and Italian and his best known work The Rubaiyat is on the curriculum of a number of American universities and is one of the most beautiful tributes to wine and life that I know of, and who makes sandals for a living?…………….. Visit him on tiny Ag Theklas street across from Monastiraki Square or visit his statue someday and say “Damn. I could have met him in person and bought some sandals too!”
And so I met him too. 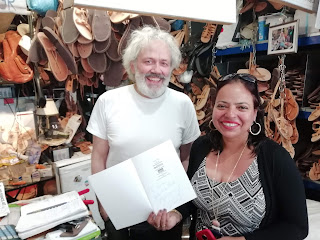 The moment I entered the workshop, I met Pantelis Melissinos, son of Stavros Melissinos, running his fingers on the keyboard. He greeted us and we could feel his charismatic personality and hospitality amidst the hung sandals and bags. Though I told him that I won’t buy the sandals, which were really tempting, but they were using cow leather too, and that I was there to meet the Artist he is, he immediately pulled out his latest collection of poems “Oedipus in Bed and other poems” and gifted me with a note. 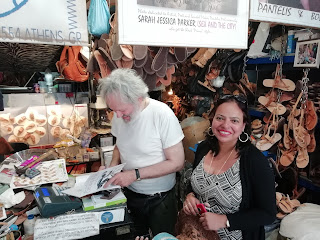 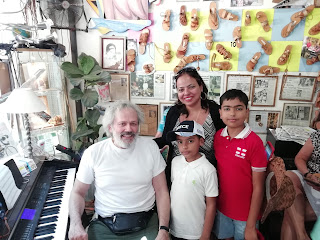 The walls of the shop are decorated with sandals, bags, books of his father’s poetry and copies of his own plays, art works and notes and letters of appreciation
Believe me, I really wanted to own one sandal from this famous shop, very simple and beautiful designs, (some appeared like our traditional Kolhapuri and some trendy too and the designs of cleopatra and Mycenean impressed me a lot) and they are not too much costly. I just wished, if he had used something else.
He is sometimes even called ‘a true Renaissance Man’ and I could see, in the names of the sandals and their designs which are quite Greek and traditional, yet loved by people today. His work on Oedipus, a mythical Greek King, proves the same and so does his famous play “Bacchus” – A musical Comedy relating to ancient Greek myths and tradition which has earned a lot of fame.
Eversince 1920, Melissionos has been featured in many newspapers, magazines and TV programmes. They have received letters and notes of appreciation from Prince of Wales, Queen of Spain, Lily Tomlin, Barbra Streizand etc.
The visit was truly worth it.
Check out yourself at http://www.melissinos-art.com/eng/sandals.htmlor at their fb page melissinos art -the poet sandal maker.

Five Cheapest Ways to Enjoy, Explore and Ease Out in Your Vacations

Garbageologist – Praveen Nayak- The Man Who Converts Garbage into...

A Breathtaking Visit to Sadhguru Ashram

From Caterpillar to Butterfly