written by Ritu Gulabani November 30, 2018
As a child, in school, we all learnt to use waste items in our SUPW (Socially Useful Productive Work) or craft periods. But as we grew, mall and brand culture seeped in so much that what we possessed earlier, appeared trash. Even the workers, laborers and helpers stopped accepting what was being given to them as help. Everyone needed money. So things which were not used were thrown as trash. Even if we felt bad, very few of us had time to think, recycle, redirect or reuse. Plastic, chemicals and synthetic material made the trash toxic, leading to pollution and innumerable diseases. Mountains of trash were developed and Ghazipur story happened.
It became an eye-opener for many including me. So ladies in my sector also started thinking about waste management. Our team found that sector 47 in Noida had already started working on it and so we went to understand the sector’s waste management process. There, at Vice-President’s house, we met Mr. Praveen Nayak, who had worked with RWA (Resident Welfare Association) and residents of sector for waste management to make Sec-47, Delhi NCR’s first Zero Waste Sector.
We learnt that Sec-47 was making its own compost from wet biodegradable waste. Non-biodegradable waste was being given to recyclers/scrap dealers rather than sending to dumping grounds or landfills. 90-95% households were segregating waste. The whole model was being managed by Vice President, Ms. Madhu Saran and a disciplined group of females. Only 10-15% waste, that too of Bio- Medical category was being left for landfill. This model was later presented for Shahdara area as “Yamuna Vihar Swachhta Model” and will be operational from January 2019.
Praveen Nayak – the man who claims that “Trash is a resource”, “Trash can generate revenue” and “Garbage is Gold.” 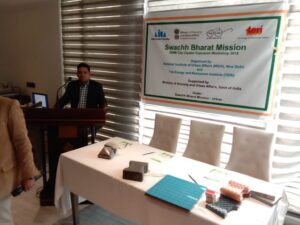 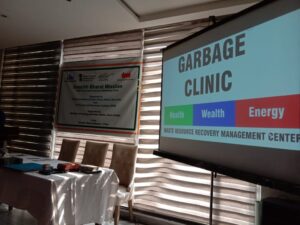 He says he received his first lessons on Garbage Management from Ambikapur, a city in Surguja district of Chhattisgarh, where he learnt from local tribal females and the then DM, Ms. Ritu Sen and started working towards it. Ambikapur is one of the cleanest cities of India today.
A system has been created in Ambikapur in such a way that there is no trash or dumping yards in the city. Older dumping grounds have been converted into parks. Not even a single person can be seen throwing trash on the streets or open ground. Streets are spic and span. Whole garbage is used in some way or the other. Kitchen waste is converted into compost and sold in the market. Non-organic waste is divided into about 150 categories viz. plastic, metallic, electronic etc. which is further used as raw material in various industries. Ambikapur is generating a revenue of 8-10 lakhs a month through its waste and females are earning about 4000 a month; a city whose area is about 2000 square kilometer with about 30,000 households. Poor, tribal, unemployed females do this work, together in  their green uniforms and earn their living through this project. The profit is further utilized in the program itself. There are about 400 females in this Green Army.
Praveen Nayak, the person who calls himself a Garbageologist has named his organization – “Garbage Clinic”, a place where waste is treated and converted into money.
From a tea shop in a small town of Nowgong in Chattisgarh to Telecom Engineer and then a Garbgeologist working all over India for Clean India Mission, Mr. Praveen Nayak is certainly a fine example of “From Caterpillar to Butterfly”
He provides a revenue generation model to RWAs/Societies/ Municipal Corporations/Authorities according to the area and resources. The model also generates employment for the females below poverty line, rag pickers, beggars etc. Mr. Nayak and his team are working to give a smart look to the team involved in waste management.
I was specifically impressed with this man because for people, waste management was a complicated task while he said that if you eat a banana, the banana peel might be a waste for you but not for a cow. It’s the food for cow. So we just have to find people who can utilize that waste in their own way.
He says, “Waste Management is possible only when we give respect to waste collector and understand that waste is also useful. Don’t change the place of garbage by merely cleaning your area and throwing it somewhere else. Manage it!”
Garbage Clinic is providing training and promoting compost making from wet biodegradable waste, blocks and tiles from plastics, bio fuel from stubble etc.
Garbage Clinic has been appointed for implementing this model not only at Shahdara in Delhi but many other cities in Maharashtra, Punjab and Chhattisgarh. I am hereby sharing a link of a
You-tube video, where Mr. Praveen Nayak was interviewed by Shri Ankur Yadav in City Bulletin News, Nowgong Chattarpur.
https://youtu.be/6LAP0MBuiKw
We wish Garbageologist Mr. Praveen Nayak and his organization – Garbage Clinic, success in all their endeavors of Swach Bharat.