written by Ritu Gulabani November 22, 2018
Sometimes situations are quite different from what we plan. While planning our Greece trip, initially we had planned a week for Crete, the largest Greek island, known for a culture and history of its own but Rhodos islands allured us too and we stole a few days from this one week and changed our entire plan. We were now left with three and a half days including travel time, for Crete.
Travel time was much because our ferry and plane were from the capital city of Heraklion while the most scenic town of Chania, where we had booked our three day stay was about 3-4 hours by bus.
Crete, they say, is a feast for senses! People are welcoming and helping, beaches are stunning and seductive, sea is crystal clear and cool, mountains are green and captivating and food is cheesy and lip-smacking.
With little time in our fist, we tried to soak our senses in the beauty of Crete. We got the taxi easily, the night we landed in Heraklion, the taxi driver was not very comfortable in English but knew the hotel and route well which helped us reach our destination fast, in about 20-30 minutes. While talking, we found from the driver that Chania was actually pronounced as Hania and Heraklion as Eraklion and later we indeed found some places where it was written as it is pronounced. In fact at some places, Chania was even written as Xania.
It was already midnight but we could make out that the hotel was originally a huge Greek villa. The stone walls, the Greek paintings on the walls and the artifacts around each corner had already fascinated us. I woke up with the sound of fluttering leaves, chirping birds, waterfall and children screaming in the pool. 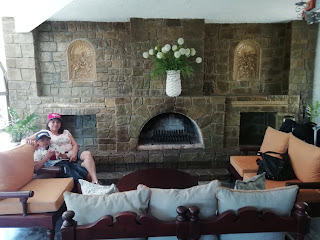 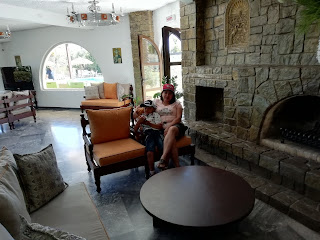 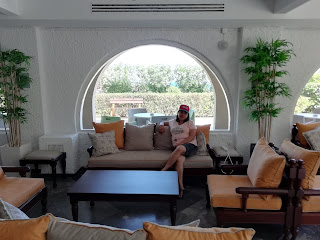 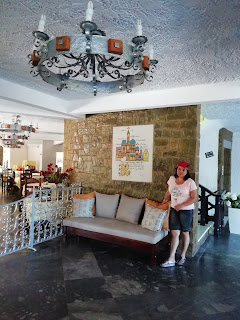 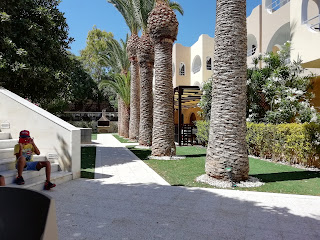 The moment I opened the door of the small balcony to find out the location of the pool, I was welcomed by the colourful dancing flowers and palms with sunrays peeping through the maze. I wanted to spend the whole day in that divine beauty but we had to get ready for our journey to Chania.
I got my kiddos bathe and we rushed for the breakfast, where we immersed ourselves in delicious Greek breakfast. The buffet had Greek yoghurt, koulouria, tzatziki,  tyropita and a variety of cakes, pastries, pies, jams, fruits and salads. After the breakfast we went to the beach nearby where kids were thrilled to watch the airplanes landing and taking off from the airport which was on another nearby coast of the island. Since it was not a crowded beach, we spent a quality time there and came back to catch our bus for Chania.
The bus was very comfortable and no one was allowed to stand. Kids were not allowed to sit in the front and the driver was a smiling and helping person. This was one of the best long bus journey, I had ever experienced. The picturesque sceneries of lush green mountains on one side and stunning beaches on the other, throughout the journey, are like a cherry with dry fruits on an exotic ice-cream.
It took about three to four hours and by the time we reached our hotel, we were quite tired. We had booked a studio apartment and the apartment owner was also a very welcoming and helping old couple. In the evening we just enjoyed at the pool and the adjacent beach. Chania is not only beautiful but livelier too. People have a great ‘ready to guide you’ attitude. 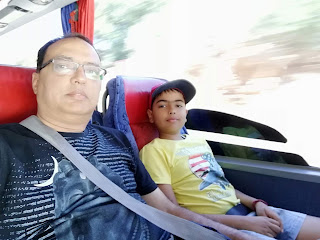 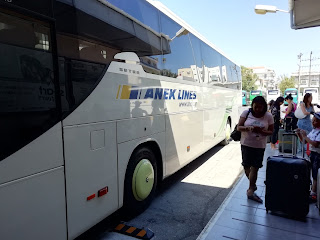 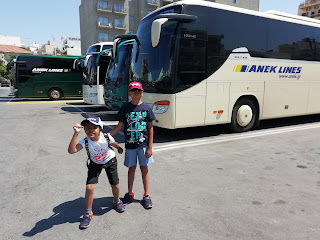 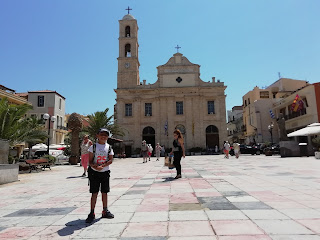 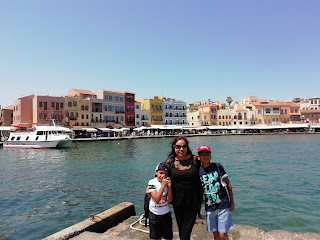 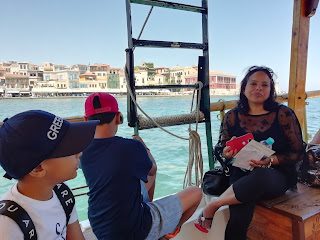 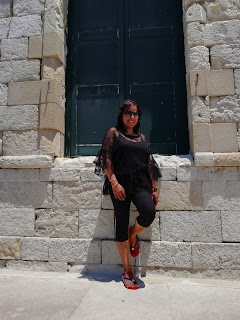 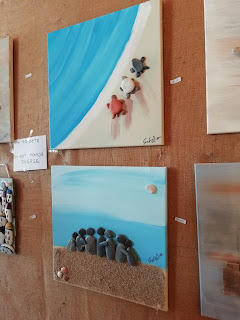 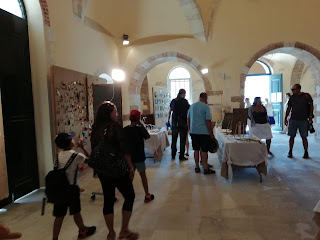 We also went to a craft exhibition nearby which displayed craft work using stones, snails and other sea resources.
We spent half of our day there. Kids enjoyed pizza from Pizza Fan, the famous Pizza restaurant chain, there and we went to our hotel in the evening early so that we could plan for a trip to Samaria Gorge the next day, with some travel agent. This way, we thought, our logistics would be taken care of, as not only bus but it involved a ferry ride too.
But when we approached a travel agent for the same, we found that we would have to get up early in the morning at about 4 am to catch their bus which will take us to the gorge and then it required whole day trekking which ends up in Agia Roumeli, on the Libyan Sea followed by a ferry ride to another coast where the bus will pick up us for the drop to the hotel. With children, it appeared quite difficult. While we understood the details about Samaria Gorge Trekking, my little one saw that “A Little Fun Train” was also doing tours to a nearby gorge in White Mountains.  He urged us to read about it which was a 4-5 hours tour. It intrigued us indeed and we decided to take that tour, the next day. The tour agent then asked us that there was a tour to Orange Valley too, the same evening and if we would be interested in going there. We immediately decided to jump onto the tour.
As we embarked upon our journey, we were introduced to our guide Yaanis, who became a great friend soon. Boys were thrilled and we loved the way Yaanis explained the history and geography of Crete during the journey to the valley. It was an amazing experience, as the train moved through the forests of oaks and chestnuts and plantations of olives and oranges. The countryside of Chania, the greenery, the fresh air and the turns around the White Mountains reminded me of the Great Himalayas. Similar to small temples and flags in between, as we travel around Himalayan Mountains, we saw tiny churches at almost every alternate turn. Reasons were also almost similar, prayers by locals, when a promise is fulfilled and in the memory of the deceased.
Yaanis told us that the oldest Olive tree in the world, which was about two to three thousand years old, is in Crete. The train stopped at a picturesque countryside so that we could capture the beauty of the White Mountains and the small ravines at the foothills and then it moved to Orange groves. In the groves, every visitor was allowed to pluck two oranges from the tree and shots of raki with honey were served to taste. 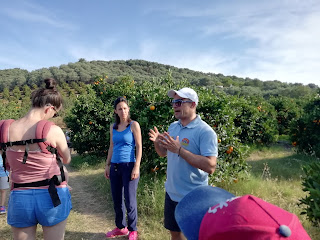 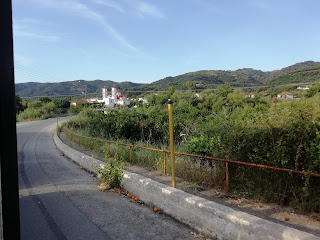 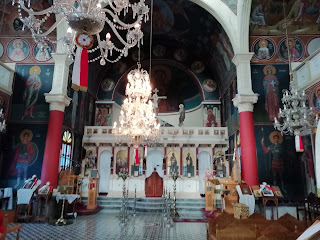 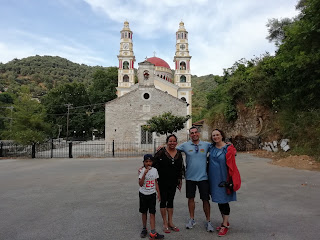 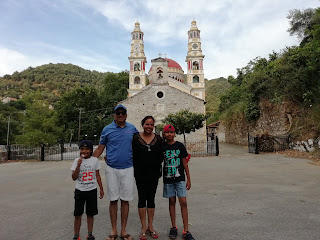 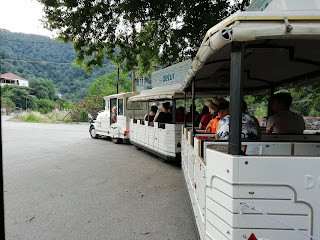 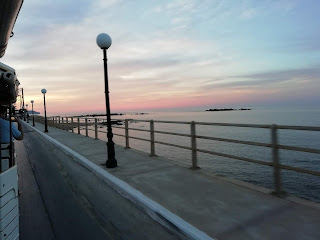 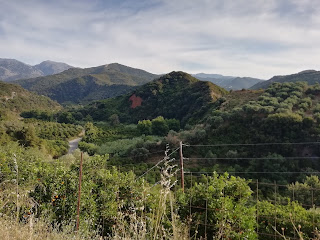 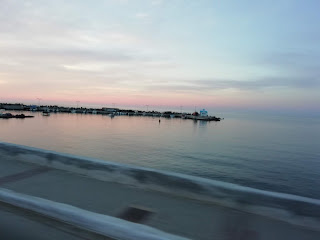 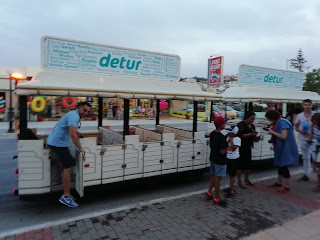 I purchased local thyme honey and raki from there. Raki, they said, is helpful for cold and cough especially in winters.
The Organic Valencia Oranges were extremely juicy, sweet and delicious.
Yaanis told us that almost all the villagers have grapevines on their homes which are not only sold to Wineries but also helps to keep their terrace and hence the house cool during the summers.
Later we headed to a village called Meskla where we enjoyed the delicious orange juice in a café under some 500 year old Maple trees. One can ease out, have some drinks and do some organic shopping too in this beautiful cafe. We were then taken to a beautifully decorated old Byzantine church dedicated to Virgin Mary where we lit candles and clicked some pictures too.
With this fun train, the day came to an end and it appeared a much utilized day. We were extremely glad that we did this tour and children were happy too.
The next day, I made a lot of orange juice before leaving for the tour to Grand Canyon, also called the Therisso Gorge. Thankfully, there was a juicer in our Apartment kitchen too. Forget the organic oranges; even the oranges from the supermarket, we had bought earlier, were amazingly delicious.
So the amazing trip to ‘Orange Groves’ followed by Therisso Gorge allowed me to let go off Samaria Gorge. I am glad we did this and children explored the countryside in Europe.
As we boarded the train for Grand Canyon, we were introduced to another very sweet guide Georgia.
Initially this journey appeared like that of Orange Groves, yet we were not disappointed because nature  trail is bound to rejoice our soul with its clean mountain air and as we stopped at Olive Oil factory, the difference was visible. The owner of the factory explained us about the machine used and olive oil extraction. Here we understood about the different types of olives and later bought some olive oil too, for the friends and relatives. Apart from oil they had soaps and other beauty products made of olive oil and we bought a few of them as souvenirs. 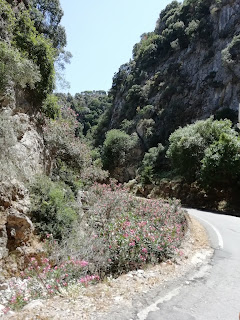 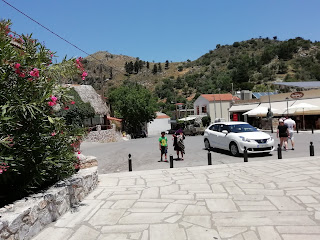 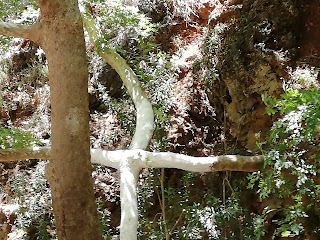 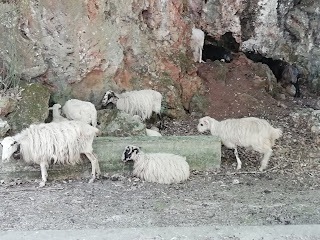 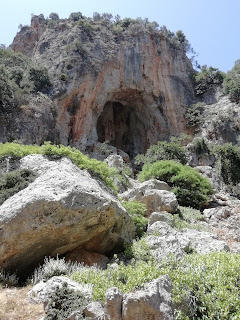 After this break we headed towards the Grand Canyon. It was truly an amazing journey on narrow clean road amidst two huge vertical mountains along with a tree line river. The greenery of chestnuts and oaks was all around along with strange curvy shapes of some trees in between. We also saw, the local endangered, Kri-kri Cretan Goats.
The train stopped at Therisso Village in front of a statue, about 16 kilometers from the town of Chania. The statue was of Eleftherios Venizelos, one of the great heroes of Crete and Greece, who started the revolution of 1905 in this village for independence of Crete.  Eleftherios Venizelos went on to become Prime Minister of Greece from 1910-1915. There was a museum and a small church too. Later we again had some orange juice with french fries before going back to our hotel.
Though small, this fun train expedition made our trip to Crete an unforgettable one.