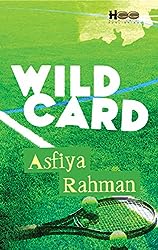 An Inspiring Story of a Tennis Legend and his Comeback – WILD CARD By Asfiya Rahman
It has been long I have written anything on my blog, first it was my book launch and then I had to be with my son as he had exams followed by medical exigencies. I am grateful that I am back on my table and thank God I could at least read a few good books, if not write. One of those nice books I read was Wild Card by Asfiya Rahman.
The book is in absolute sync with my blog “From Caterpillar to Butterfly” and hence my choice after this long gap. It is an inspiring story of a tennis legend who has won almost every cup except Wimbledon, which has been his childhood dream. A car accident kills his wife and turns him into a single parent of a girl with special needs. His daughter becomes his world and he shuts all the doors to tennis till she turns eight and discovers the truth of her father’s life.
The book is not for tennis players or sports persons only but for everyone who wants to read a good book and get motivated. The power of thoughts and visualization has been rightly depicted by the author, which is used by sports persons even in Olympics. Tennis terms have been well explained in between.
Truly a caterpillar to butterfly story, the way Karan Mehrotra, the Tennis legend tries to make a comeback and how he wins through a wild card entry. There are three interesting aspects of the story: One, how he brings up his disabled daughter. She is so efficient and swift in her movements on wheelchair that she doesn’t consider herself a handicap and in fact inspires her father to make a comeback. Two- I loved the way, the protagonist retrains his brain to win every single match of Wimbledon, after his entry through Wild Card. Three – it is indeed interesting to read how his team is build and how they help him in achieving his dream.
Asfiya has given a vivid and interesting description of every match and I especially enjoyed reading the racing brain of the protagonist during the match.
A must read for all those who have dreams, doubt themselves and want to make a comeback in whatsoever field they want to.
Book Details-
Title – WILD CARD
Author – Asfiya Rahman
Cover- The cover is green tennis field with racket and two balls and very apt.
Place – India
Publisher – Half Baked Beans Literature
Pages – 146
Published in – 2016
Price – Rs. 199

Five Reasons: We need a Digital Detox and How to do it?