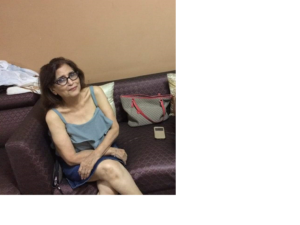 Yes you got it right! She is 78 and can beat many beauty queens including those in B-town. Even on a surprise visit to her house, you will find her dressed very elegantly. She will welcome you and serve with a smile in her beautiful house with much charm and poise. A lady, who never went to school but can fluently speak and write four languages viz. English, Hindi, Sindhi and Bhasa Indonesia. That is Rita Khemlani, my Aunt. She was born in Tando Mohammad Khan, Sindh, Pakistan in 1940 (the then in India) and lost her mother when she was hardly seven to the deadly disease of those days, Tuberculosis. She was raised by her Uncles and Aunts and after some time her father married again. In 1947 after the Indo-Pak partition, the family shifted to Jodhpur, Rajasthan and later to Jombang, Indonesia. From two, they became ten siblings and her life was filled with joy.

As a child, she was an extremely beautiful and ambitious girl. During those days, in Sindh, girls were strictly prohibited from academics and school, but she didn’t lose her hope and educated herself through Radio, newspapers, books and educated people around. As she grew, she also became fond of beautiful and stylish dresses and so would often try to stitch them on her own. Thus she herself  learnt stitching and designing too.
Then she learnt music from her younger Uncle and fell in love with the Harmonium. She still possesses the same harmonium on which she sings Bhajans in Satsangs
Ask her and with a blush on her face, she tells about the day, she met her prince charming. He had made a list of questions to be asked from his prospective bride but the moment he saw – the beauty epitomized – he couldn’t say anything except a ‘Yes’.
She got married in Jakarta, Indonesia and had three children. Though misunderstandings blew away the true happiness out of  her married life, which had appeared to be a fairy tale but she didn’t let herself down to live a depressed life. She stayed motivated and nurtured her children.
Today, when her children are settled and she has no responsibility, she takes good care of herself, goes for Yoga, sings beautiful psalms, attend spiritual discourses, does charity and even goes to salon and parties. She is a beautiful human being, inside out, who is always grateful to Lord.
What I really appreciate about her and her siblings is that they all keep meeting and partying instead of cribbing for their sons and daughter-in-laws, who are usually running short of time.
Born in Pakistan (the then India) and later brought up in Indonesia, she is very Indian at heart. Although a widow, she inspires almost everyone around her to live a beautiful and fulfilled life.
I strongly feel that our elderly generation especially women should live a happy, inspiring and enthusiastic life like her, instead of filling themselves with fear, pain, remorse and self pity.

Anamika Chaturvedi : From a Physicist to an Award Winning Environmentalist

I might suggest solely beneficial in addition to trusted facts, and so find it: 2969886 Cat Auxiliary Sea Water Pump