Home » Age is Just a Number Series : Meet Richa Gupta : A 42 Year Young Teenager, a Dog Mom and an Acrobat

Age is Just a Number Series : Meet Richa Gupta : A 42 Year Young Teenager, a Dog Mom and an Acrobat 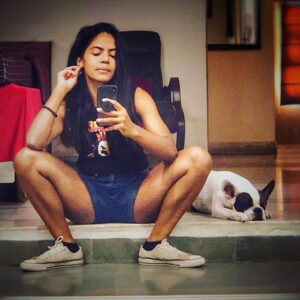 Did you watch the movie “Saand ki Aankh”- A story of two women with indomitable spirits. We have many such women around us and last year I met a girl in my yoga class who has proven that “Age is just a number”. I said girl because though she is forty-two but looks no more than an 18/20-year-old.

Meet Richa Gupta who is single and lives in Noida with her mother and two dogs. Workout, her dogs and her mother are her life lines. As a child, she was very good at running and won many competitions but by the time she was about to finish her middle school, her class teacher persuaded her to leave sports and concentrate on grades. Ironical, isn’t it?
Anyways she started working on her grades though she had to put in three to four times extra efforts than the average student of her class. But yes, with extra efforts, she improved and so much so that she became a topper in first-year Maths (Honours) in Hansraj College (Delhi University).
But due to issues at home, she started smoking and lost her track. Perhaps, had she been into sports, she might not have digressed the way she got as passion keeps you going and in fact helps you during the tough times. By the time she finished her graduation, her parents had separated and she shifted to Noida along with her mother and siblings from North Delhi.  In Noida, she started working with the Garment Industry to earn a living and was adjudged the most consistent performer in many appraisals.
In 2017, she lost her brother. Another bolt and in her words, “We lost a gem of a person because he never cared for his health”. Today her sole aim is to stay fit and inspire people to work out. At 42 she looks like a teenager and possesses a similar zeal.
“So were you always fit like this?” I asked her and with a grin she replied, “No! In 2005 I met an accident and my weight even touched 66 kgs. In 2010 I decided to concentrate on my health. First, I quit smoking through sheer will power and then I started treadmill. Gradually, I started watching fitness blender, a fitness app and in 2017 I joined a gym, started running and now doing yoga too.” 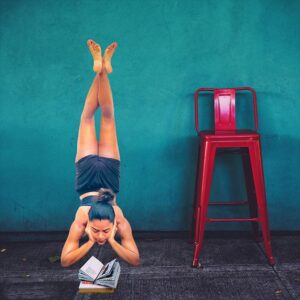 Richa is an inspiring and disciplined female who has achieved much in the field of fitness after 40. She is part of Adidas Runners group, Devils Circuit and likes. She has recently won and secured first position in the following two marathons. Namely Kronos LiveInspired 10K Run Noida on 8th September 2019 and Decathlon Opening Run Noida 5 K 2019 on 28th July 2019
On 20th October, 2019 she participated in Airtel Delhi Half Marathon of 21.09 kms and managed to finish it in 1hr 58 min 4 seconds, which is pretty good for a beginner and was among the top 20 in her age category.

Covid-19 changed everyone’s life and hers too. First, she became an online trainer. Not only of yoga but she also gives functional training which focuses on mobility and strength both.
A non-veg lover, she has quit eating meat and survives happily on greens and pulses now. She calls it her achievement of the year.
One can follow her on instagram page @a_richa-life
or FB link https://www.facebook.com/richa.zerlina

Anamika Chaturvedi : From a Physicist to an Award Winning Environmentalist

Age is just a number ….–Series – Meet Sheetal Gupta the 45 plus singer who recently earned fame after her song ” Kadi Hoon Karke” of Virgin Bhanupriya

How I Traveled and Kept My Family Safe When the...

Inspirational! There's lots we can do by focussing our mind. Fitness is one of my new year resolutions.

Thank you Deepti and all the best for your fitness goals !

Age is just a number, it is in ur mind,One never gets old.Think positive.Here is an example,u have just gone through,visualize this and try to understand that God has given u this life,utilize it in a right manner.Do a good deed to urself and let others do the same.Be happy and give happiness to others.Yoga is a good medium realize ur goals.