She had impressed me years back with her confident personality, in early 90s when she could drive a jeep alone as a young adult. We knew that she was a different breed altogether…. bold, enthusiastic and grinning, always. 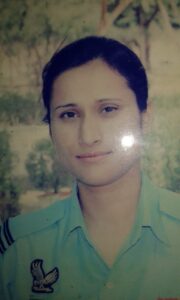 Friends, on the occasion of Mother’s Day, let’s meet a very bold and beautiful mother, Nitu Thapliyal, who was amongst the first batch of women Air Force Officers.

FCTB:Tell us about your childhood, your aspirations and dreams as a young girl.

Nitu: I was born in a small place in West Bengal , Malda and grew up in Dehradun. I did my schooling from CJM Dehradun and passed out as the Head Girl in 1991. My childhood was happy. I grew up in Dehradun with my elder sister,elder brother,mom and grandmother with us. My father was than a government servant and had a transferable job. I have very happy memories of spending our summer and winter vacations at his various postings. Have beautiful memories of receiving his letters and sending him handwritten letters,memories of watching TV with neighbours, watcing serials like Buniyaad,Hum log,Ramayan,Mahabharata; waiting for Chitrahaar to watch songs, eating for weekend movies. I had lots of friends and played lots of outdoor games too. Touchwood I had a beautiful childhood.

FCTB : What about higher education?

Nitu: I did my graduation from the prestigious Maharanis college ,Jaipur. I was persuing my MSc in Physics when I joined the Indian Air Force,my dream destination.

Later I did Post graduate Diploma in Business Adminstration from IIM Ahmedabad after quiting Air Force and a Diploma in Training and Development from ISTD ,Delhi.

FCTB: What motivated you to join army?

Nitu: The discipline and the Uniform motivated me to join the Defence services.

FCTB: We know it is difficult to get through Army, what were the tests you had to undergo and how did you prepare for them?

Nitu: Ours was the First batch of women Controllers in 1996.We had to send our application along with our Bio data.Selected candidates were called for SSB.
I appeared for the SSB where in we had written test,group activities,group discussions, games and various other activities during our stay for the SSB in Varanasi. After rigourous session of activities we were put in front of a board of members for the Final interview. Based on various aspects and personality traits suitable for the armed forces, I was selected for the First batch of woman controllers. 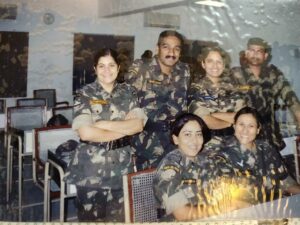 FCTB: So what were your posts/ positions held by you in the Army?

Nitu: My initial training was at Air Force adminstrative college At Coimbatore.
My professional training as a fighter controller was at Air Defense college,lucknow.
My on the Job training was at Amritsar.My first posting as a fighter controller was in Delhi,wherein I became operational as a controller.
My second posting was at Jammu where I was fortunate to serve in both safed Sagar(Kargil operation) and Op Parakram. And participated in active operations.
My 3rd and last posting was at Jodhpur and participated in various Air Force level exercises.

FCTB: You belong to the early batches of Indian Air Force when it opened its vacancies for females.So how different is it now as compared to the days when you were inducted?

Nitu: As we were amongst the first batches.The Air Force was in the process of gearing up for women officers. Like they have shown in the movie Gungan Saxena there were no separate facilities for us.
But things were changing and people were very cooperative and encouraging.To make things easier for women officers as a policy two Women officers were posted together to a station. Things have changed for the good.Officers are better prepared to welcome young women officers and treat them at par with them.

FCTB: What is your message for women?
Nitu: Live life to the fullest.
Value time.
Rise with the Sun. Join the 5 am club.
Exercise regularly.
Read as much as possible.
Be disciplined.
Be ethical, never cheat.
Value what you have.

FCTB: For girls who are interested in Army.
Nitu:My message to them is “Just go for it if you are eligible”. The Services prepares you for life. Once an officer always an officer.It teaches us discipline and dedication.

FCTB: What are you doing now?

Nitu: Presently am working with the Aditya Birla group and look after security and administration.

Tell us about your husband, your children?

Nitu Thapliyal: I met my husband in Delhi during my first posting. We both had been sent by our respective units to be Liason officers at the Commanders Conference at Wester Air Command. Rest is history.We got married in 1998.
We have two beautiful children,Vedansh 18 pursuing his graduation and Vishakha,11 in class 7. My husband is still serving with the Indian Air Force.

FCTB: Tell us one special lesson you learnt from your mother.

Nitu : Take life as it comes.

FCTB: Your message for mothers…

I was a Banker by profession and a certified Lecturer but motherhood changed life and I turned towards my passion of writing, yoga, and traveling. I strongly believe in the "Law of Attraction and power of positive thoughts" and my book "From Caterpillar to Butterfly" reflects the same philosophy through its real-life inspiring stories and experiences.

Thank you! I am glad you liked.

Very impressive story Ritu. Have known Nitu as a classmate but feeling so proud to know her journey in Army. Too happy to learn about her achievements. Thanks Ritu for writing beautifully.

Thank you so much Anamika! I am glad you liked😊

Nitu a courageous lady since I know and Ritu wonderful in expressing. True words for both caterpillar to butterfly.

Thanks a ton buddy🙏🙂

Great share and very interesting to know the real life experiences. Also very encouraging message to the women. My salute to Nitu Madam for her achievements. Keep going. My Best wishes.

Exactly! That was the reason I wrote! I am glad it’s inspiring people🙏🙂

Very inspiring for everyone. Thanks for sharing thes wonderful interview..
I am a research scholar at Jawaharlal Nehru University New Delhi.